Car model and year: 2007 F-350 Dually 6.0 – 99,000 miles Stock
I have had the truck for just over a year and have put about 9k on it. It’s a king ranch and the previous owner took pretty good care of it for the most part from what I can see. I also just topped off the tank to dilute the Diesel Kleen a bit.

Symptom:
Started breaking up running short of 8 it seemed. Once I accelerated past 2k it cleaned itself out. every stop light it seemed to get worse. let it cool down still a little rough at first then progressively got worse. Just Changed the EGR 3 weeks ago with a motorcraft one, no codes showing, got it home changed both fuel filters they were nasty. This seemed to have made it alot better but not it’s blowing white smoke at idle and black on acceleration. I also added Diesel cleen 40gal injector treatment to about 10 Gallons of remaining fuel in the truck.

What I did:
I didn’t run a balance test on it yet not sure what software to use for that. The filter was really brown and dirty, even some rust came out. The separation side had a bunch of sediment at the bottom and a little water. It did come up saying water in fuel a few days ago but went away.

It was more from the water seperation drain plug. The filter housing cap had a little but nothing like the below photos: 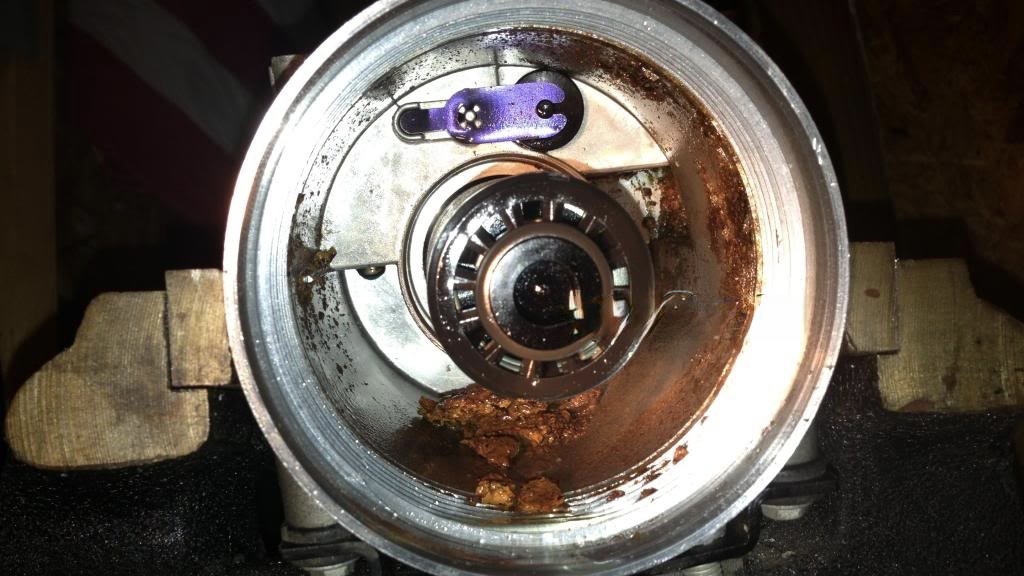 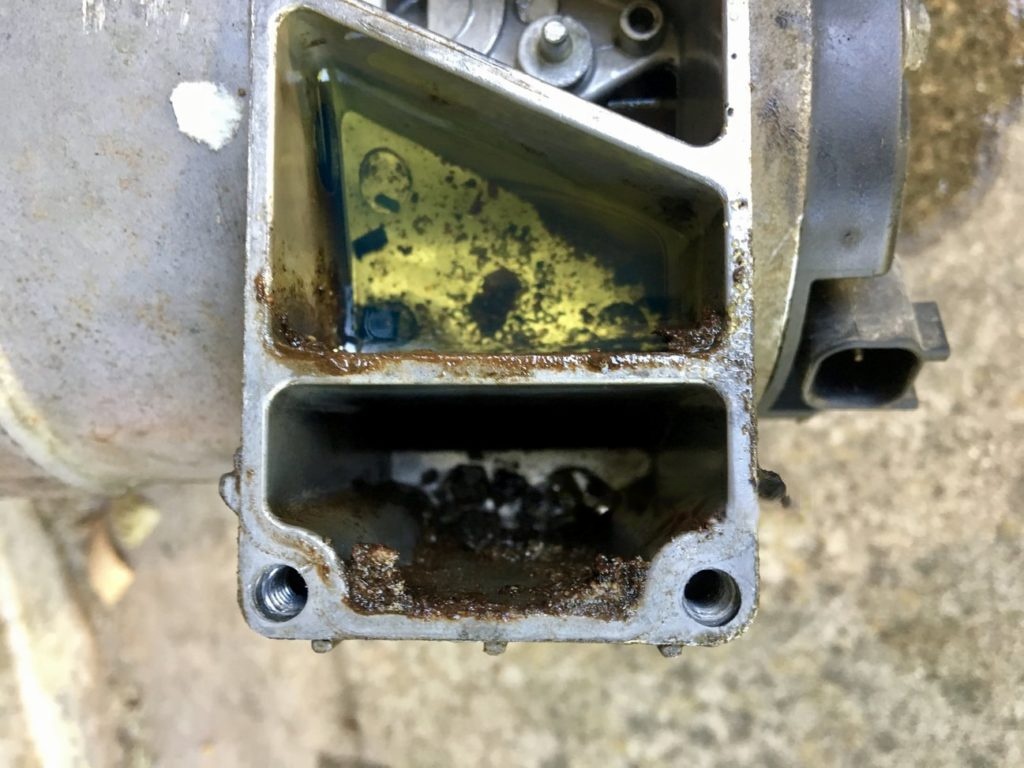 Debris covering the water-in-fuel sensor can cause the sensor to either to go on all the time or sometimes insolate the sensor from water. 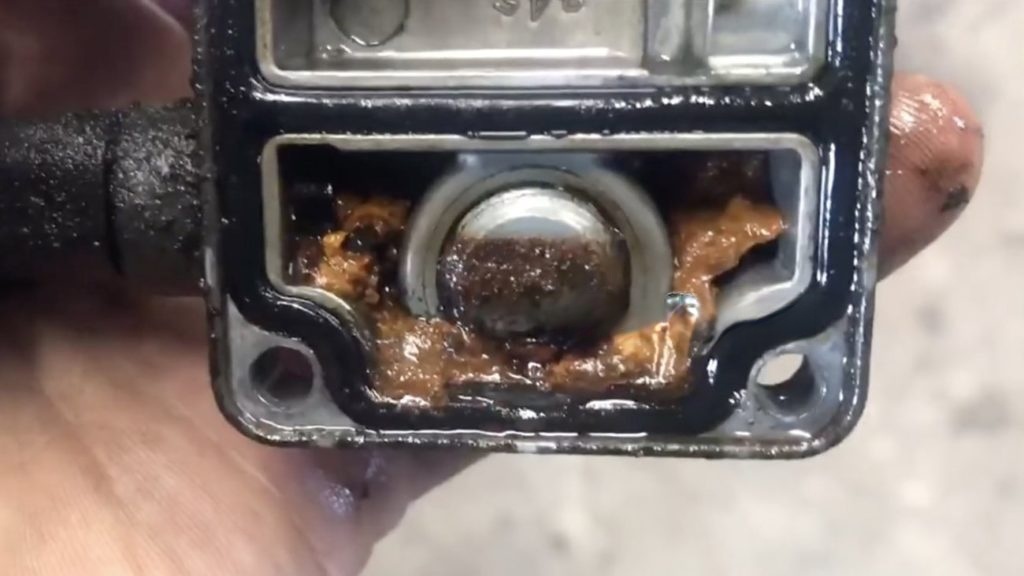 What should to do?
I might be getting a little hyper here …..

The concern about water in the fuel is that it can cause damage to the tip of an injector, and with a bad injector tip over-fueling can ruin an engine real quick, like 25 miles. Not that it is what you have, but the risk to reward here is concerning. The fuel filter being brown and dirty is not a good sign of well maintained unless a really bad load of fuel was just pumped in. With a 6.4 truck, you’d already be in a world of hurt.

The balance test is to tell about the injectors and cylinders is primarily using Ford’s software and hardware, IDS and FORD VCM. A few shops have it, but it’s few. 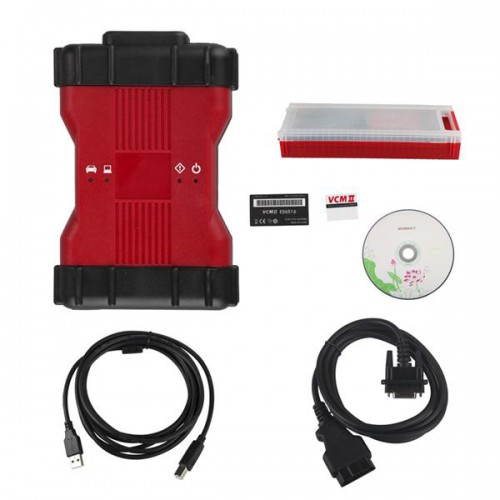 Question:
it means that you didn’t get a bad batch of fuel. The collection chamber thing is not that abnormal. At some point, you may want to spray some carb cleaner into the housing from the plug port to clean it out, but you need to leave it open for an hour to let it dry. Or you can pull the cover off and clean, but you need the line separation tools for the engine side connectors.

You have still left with IMO an over-fueling injector. It could be the tip, spool valving, internal issue…whatever. There’s no way to tell how bad it may be without testing.

A bad EGR valve can also mimic some of the traits you have, but you did change that. So ….. what prompted the change; any possibility it’s not installed correctly?

Answer:
The egr went bad a few weeks ago and i got a code for it so i pulled it and replaced with a new one. Im sure its right on install but thats not to say it didnt crap out on me no check engine light though. Im a bit concerned cause i need to drive 3 hours north tomorrow and dont want to do engine damage. If its a injector wouldnt that throw a code also. Could i have damaged something by letting it warm up for an hour in my driveway? I usually do that every day in the winter here.

Question:
The EGR is probably fine.

As I stated, I get hyper when someone mentions smoke. I lost a motor with a cylinder failure, with a lot of smoke. I’ve had an injector go bad that produced both white and black smoke. No engine damage but took some work with an IDS to figure out it wasn’t an EGR valve or turbo. I was able to put some miles on that.

But there is no way to really advise you how bad your situation is. I don’t think any reasonable person could. There are some who have come here with a smoking truck after trying to get it home 25 to 50 miles and toasted the motor. Diesels are not a gas motor, excess fuel will cause elevated temps.

But a bad injector will throw a code. It’s a hard call, I’m cautious.

Answer:
My other trucks are 7.3 and ive only had basic issues like glowplugs harnesses, oil pressure lines etc. This ones got me boggled as there was no smoke until i changed the fuel filters. I hear a little more noise on the passenger side bank which makes me wonder if its an injector. If im nominal on the throttle no smoke. I’ve heard some others saying it just needs to get the air out of the system which im wondering if true. I pulled the secondary filter and there wasnt much fuel in it. I primed it and got the fuel level up put it back on. Gonna try a highway run to see if it cleans itself out. Think that will hurt it?

I scanned it and it had a softcode on injector #7 i cleared it and it didnt come back. I decided not to run it and took my 7.3 up north instead! Ill change the egr again when i get back, see what happens then change the injector if needed. The FICM wouldn’t do that right?

Question:
A malfunctioning injector would still start with the other 7, just not well.

The protocol for injector replacement is to ensure you pulled the original copper sealing washer, clean the bore sides and bottom with an injector brush, oil the new o-rings, blow out any oil that might be in the injector hold-down screw bore, and torque to the proper tightness. Ensure the connector is on properly, and cycle the key-on through 2 or 3 cycles to make sure the fuel system is properly charged. No re-programming is necessary.

Finally update at 03-11-2020:
I did all that and it was a slightly used motorcraft stock 6.0 injector from a buddy when he upgraded. There’s only 3 plugs and the battery lead so I’ll have to go check them all again to make sure they are tight. I swear I heard the click on all of them.
So one thing I forgot to mention is that the dummy plug in the oil rail had a D Ring that was toasted. I tried to put another one from a generic kit in it. I just read about that causing a “no start” issue. I ordered a whole new upgraded one from Strictly Diesel for 20 bucks. Fingers crossed that’s the issue!! I’ll tear it apart on Sunday to see if that’s the fix.