Here in this article, most customers who bought MS908S Pro from our website Obdii.shop have been asking about if we can provide the instruction of its Active Test, Special Functions, Programming & Coding. Check below and you will get what you want to learn about.

The Active Test function is used to access vehicle-specific subsystem and component tests. Available test vary by manufacturer, year, and model, and only the available tests display in the menu.

During an active test, the tester outputs commands to the ECU in order to drive the actuators. This test determines the integrity of the system or parts by reading ECU data, or by monitoring the operation of the actuators, such as switching a solenoid, relay, or switch, between two operating states.

Selecting Active Test opens a menu of test options that varies by make and model.

Selecting a menu option activates the test. Follow all screen instructions while performing tests. How and what information is presented on the screen varies according to the type of test being performed. Some toggle and variable control tests display Active Test Controls at the top of the screen with data stream information below, or vice versa. 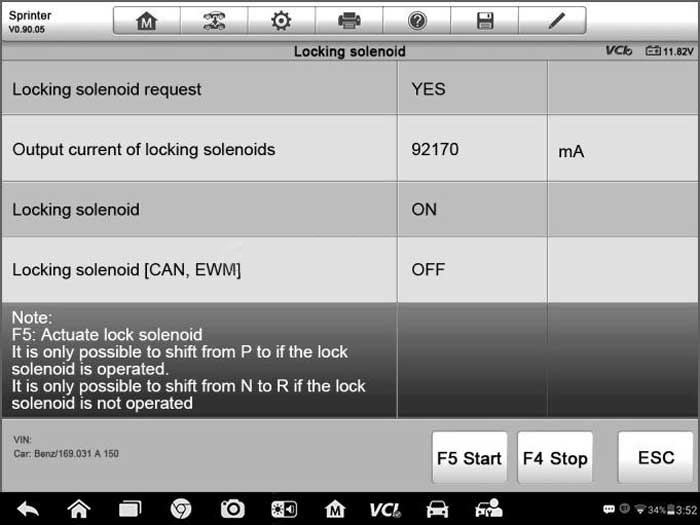 The functional buttons at the lower right corner of the Active Test screen manipulate the test signals. The operational instructions are displayed on the main section of the test screen. Simply follow the on-screen instructions and make appropriate selections to complete the tests. Each time when an operation is successfully executed, message such as “Command Finished”, “Activation Successful”, or something similar displays.

Attention here: remember to tap the ESC functional button to exit the test when finished.

These functions perform various component adaptations, allowing you to recalibrate or configure certain components after making repairs or replacement. The main section of the Adaptation Operation screen displays a list of operational and vehicle status information, which mainly consists of four parts:

1.The first part in the top line shows the description of the operation being performed, and the execution status is displayed on the right, such as Completed, or Activated, etc.

2.The second part shows the preconditions or requirements for executing the operation being selected.

4.The last part displays the instruction of how to use the functional button at the lower right corner of the screen to manipulate the teach-in operations. 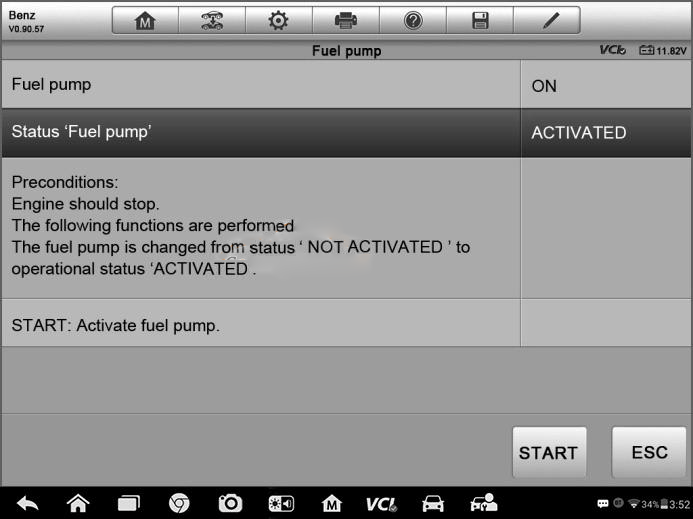 Read the information carefully and check the vehicle condition accordingly, when you are sure that the vehicle is ready to perform the adaptation, simply follow the instruction provided to make appropriate selections. When the operation is done, an execution status message such as Completed, Finished or Successful, displays. Do remember to tap the ESC button to exit the function.

Since the introduction of OBD II and leading up to modern Hybrids and EVs,computers and software in cars have been expanding at an exponential rate. In-car software is becoming one of the leading needs for service, and updating software may be the only way to fix some of these issues:

The Programming and Coding function is used to re-flash the vehicle control modules, it allows you to update the computer software on the vehicle to the latest version, as well as to reprogram adaptive data for certain components after making repairs or replacements.

Important message: The programming function can only be applied through connection with the J2534 programming device, which serves as a PassThru interface to establish communication with and transfer data to the vehicle’s ECU.

Available programming or coding operations vary by the test vehicle, and only the available operations display in the menu.

What can users do? ==>Two general types of programming operations provided:

(1).Coding – also known as Teach-in Program, Component Adaptation or something similar, is used to reprogram adaptive data for vehicle control modules after repairs or replacements of vehicle parts.

(2).Reprogramming Operations – downloads new version of software subscription from the online server database through Internet access (this procedure is done automatically when the tablet is connected to the Internet, so there is no need to check for software subscriptions yourself), and reprograms the newest software version to the vehicle’s ECU.

Selecting the Programming or Coding function opens a menu of operation options that varies by make and model. Selecting a menu option either shows a programming interface or opens another menu of additional choices. Follow all screen instructions while performing the programming or coding operations. How and what information is presented on the screen varies according to the type of operation being performed.

What variant coding function actually display in the unit’s screen? 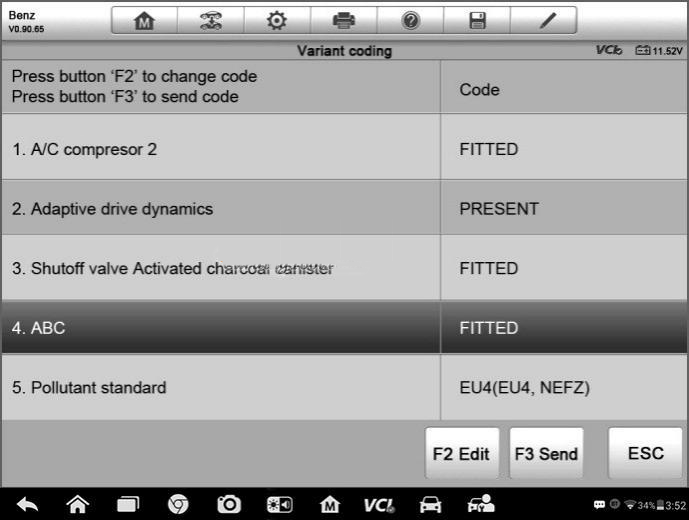 The main section of the Variant Coding screen displays a list of vehicle components and the coding information that mainly consists of three parts:

1.The top line on the list displays the instruction of how to use the functional button at the lower right corner of the screen to manipulate the coding operations.

2.The second part under the top line of the list displays all available systems for coding on the left side, and the coding data or value on the right side.

3.The bottom line of the main section displays the functional buttons, which allows you to manipulate the operation.

Check the vehicle condition and the coding information carefully, and use the functional button to edit Codes for the corresponding components, tap Send when you finish edit for all the items. When the operation is done, an execution status message such as Completed, Finished or Successful, may display.

Do remember to tap the ESC button to exit the function.

How to perform Reprogramming Operation?

Typical reprogramming operations require you to input and validate VIN number first. Tap the input box and enter the correct number, the programming interface then displays. 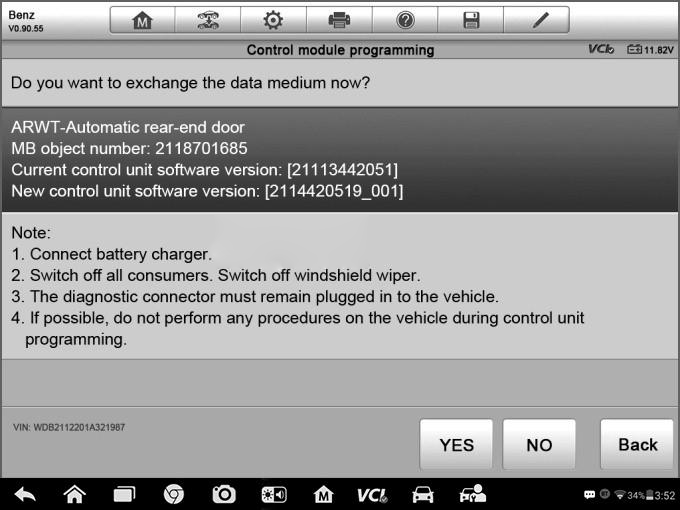 Throughout the programming procedure, a series of on-screen operational instructions will display to guide you through.

Carefully read the on-screen information and follow the instruction to execute the programming procedure.

Important message: When reprogramming onboard, always make sure the vehicle battery is fully charged and in good working condition. During reprogramming, there is a risk of having the operation failure if voltage falls below the proper operation voltage. Sometimes a failed operation can be recovered, but there is a chance that failed reprogramming could ruin the control module. We recommend connecting an external battery charger to the vehicle to ensure a successful operation.

Occasionally a flash update procedure may not complete properly. Common causes of flash errors include poor cable connections between the tablet, VCI, and vehicle, turning off the vehicle ignition switch before the flash procedure is complete, or lowvehicle battery voltage.

If the process crashes, recheck all the cable connections to assure good communications and reinitialize the flash procedure. The programming procedure will automatically repeat if the previous operation does not succeed.

That’s all. Thank you for sharing your time with us!