Unfortunately, quite often the diagnostics, performed by “specialists”, is limited by reading the error messages and replacing all components, indicated in the error messages. As a next step, “suspicious” elements are replaced, and if the result is not achieved – the car is recognized as “non-repairable”.

Yes, sometimes the error message regarding some component is correctly displaying its defect. But – N series engines are complicated, their performance is affected by many systems. As a result, mainly the error messages regarding functionality (not a defect of the exact element) problems are stored.

For example, Lambda probe reports, that the fuel mixture is lean. Typical diagnostic’s “specialist” would require to replace the Lambda probe! Why? The error message refers to the fuel mixture, not the probe! It could be affected by many factors: air suction, incorrect fuel pressure, leaking injector, etc.

Below I compiled several samples, which confirm – the error messages are indicating the problem, not suggest, which component has to be replaced. Only qualified diagnostics indicate the real defect! For this reason is very important to collect live data and analyze them!

Attention! These are examples of case studies! Please, don’t use them as a solution to your problem! Your, situation, most probably will be different. Perform the Online diagnostics to indicate the defects!

If you don’t perform quality diagnostics, you will overpay for replacement of functional elements! 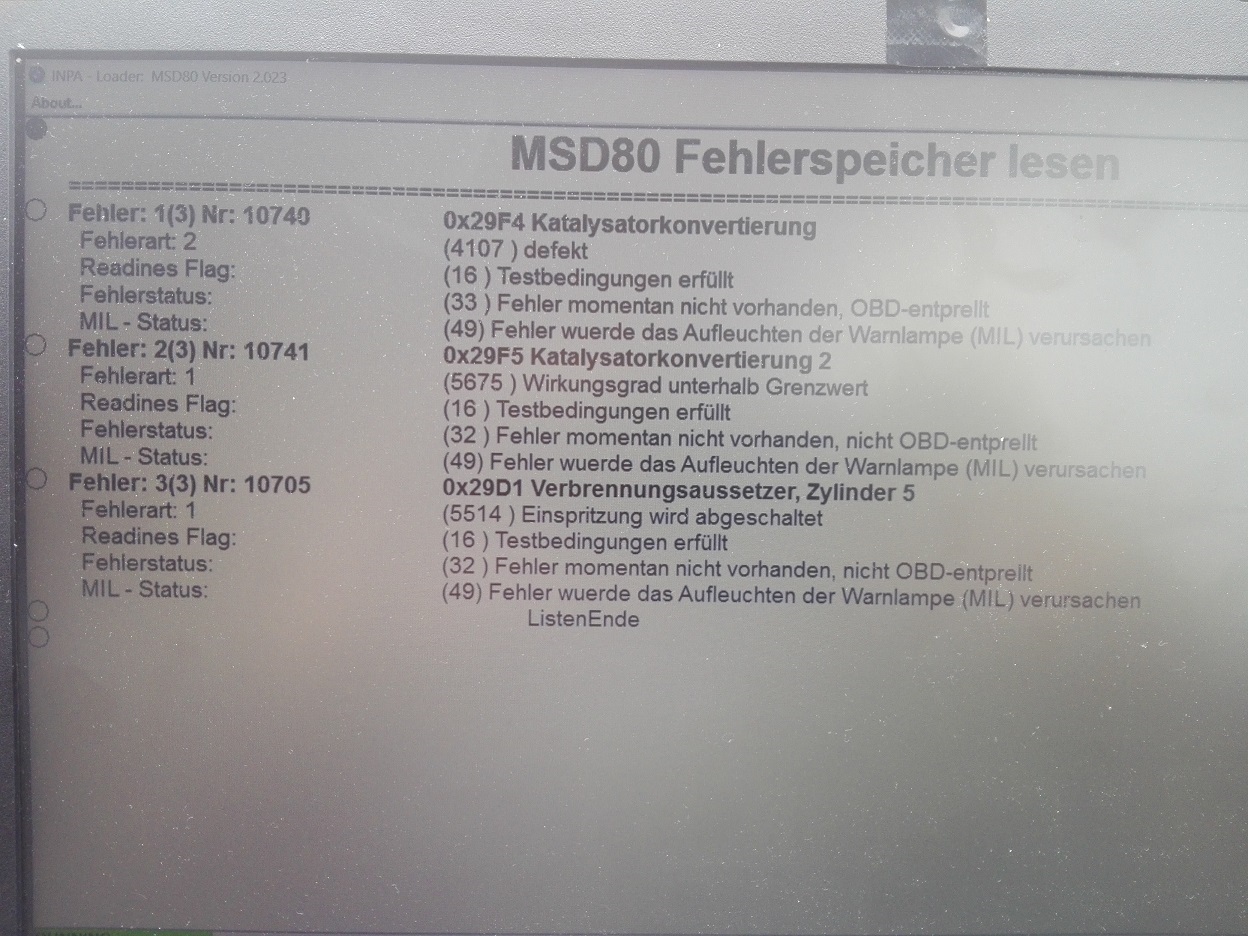 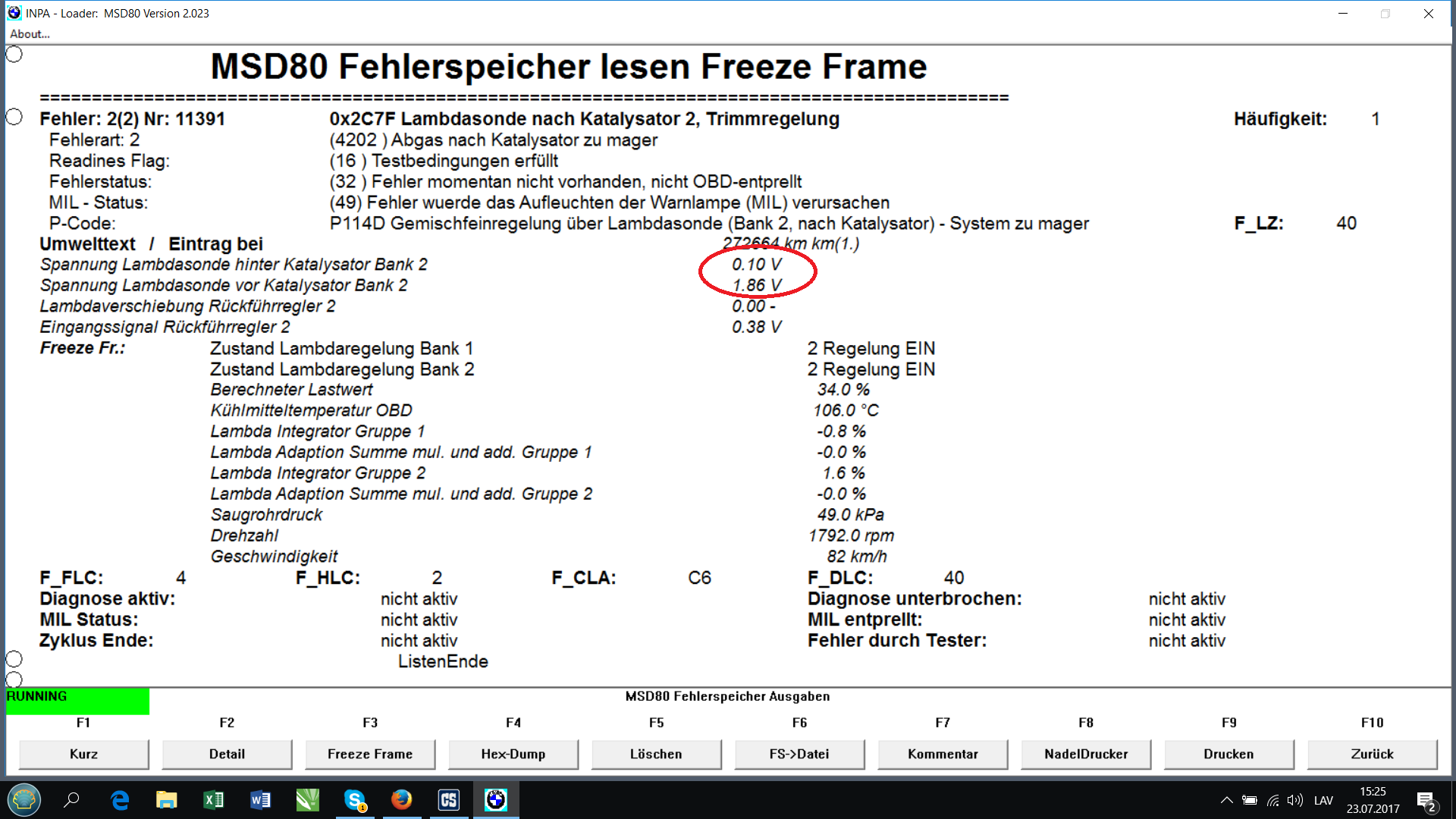 This problem is typically caused by:

a) incorrect fuel mixture in cylinders (individual adaptations of cylinders are disturbed);

b) air suction in the exhaust system.

In the current case – exhaust was not airtight (small air suction in the connection after control probe). 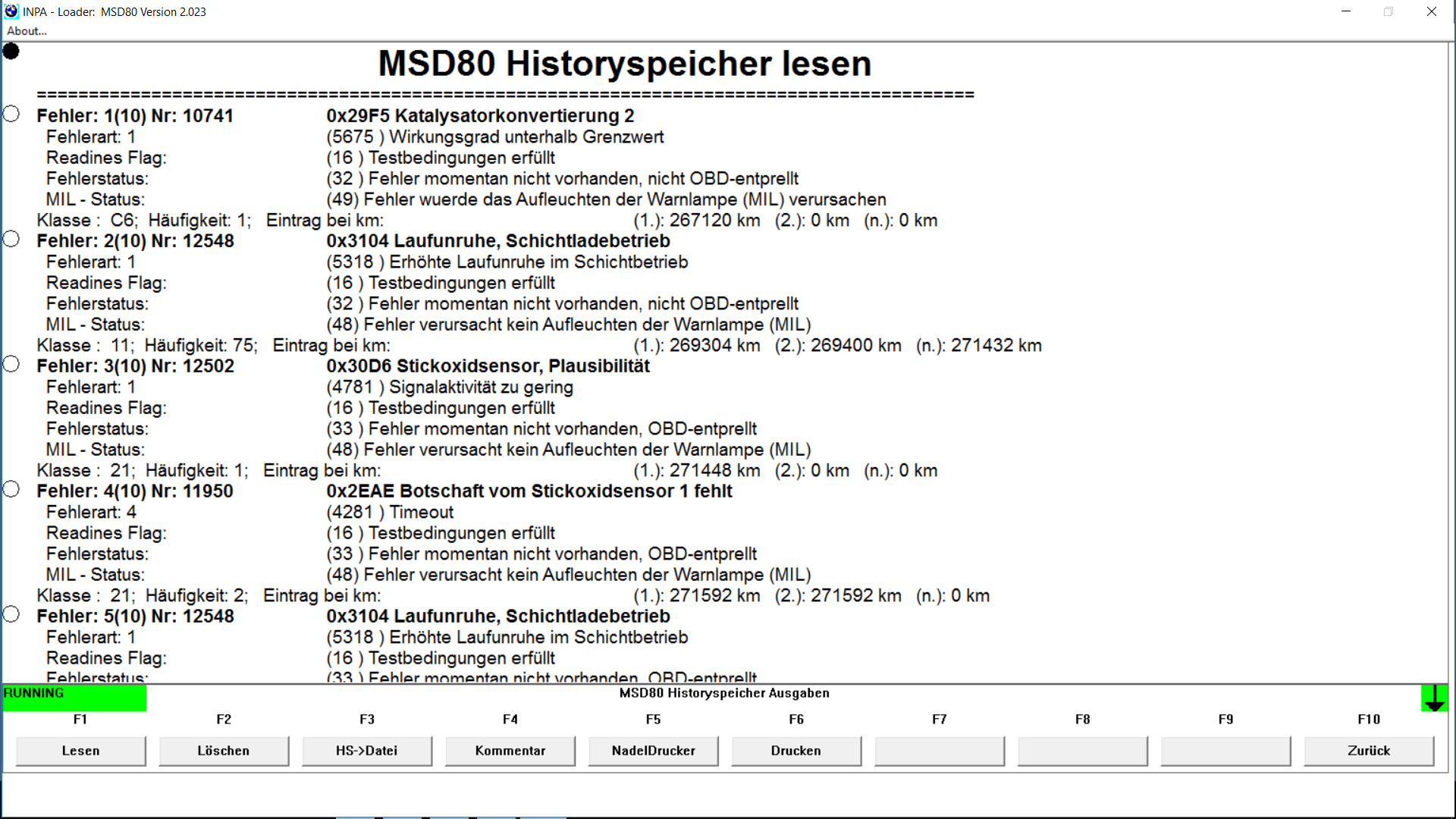 No, this time there is a very simple cause – after maintenance of exhaust system (and the NOx sensor was disconnected during it), the engine was not re-adapted. The result of faulty performed service procedure – the error messages, uneven performance, shivering of the engine, switched-off Stratified charge (of course – also increased fuel consumption!). 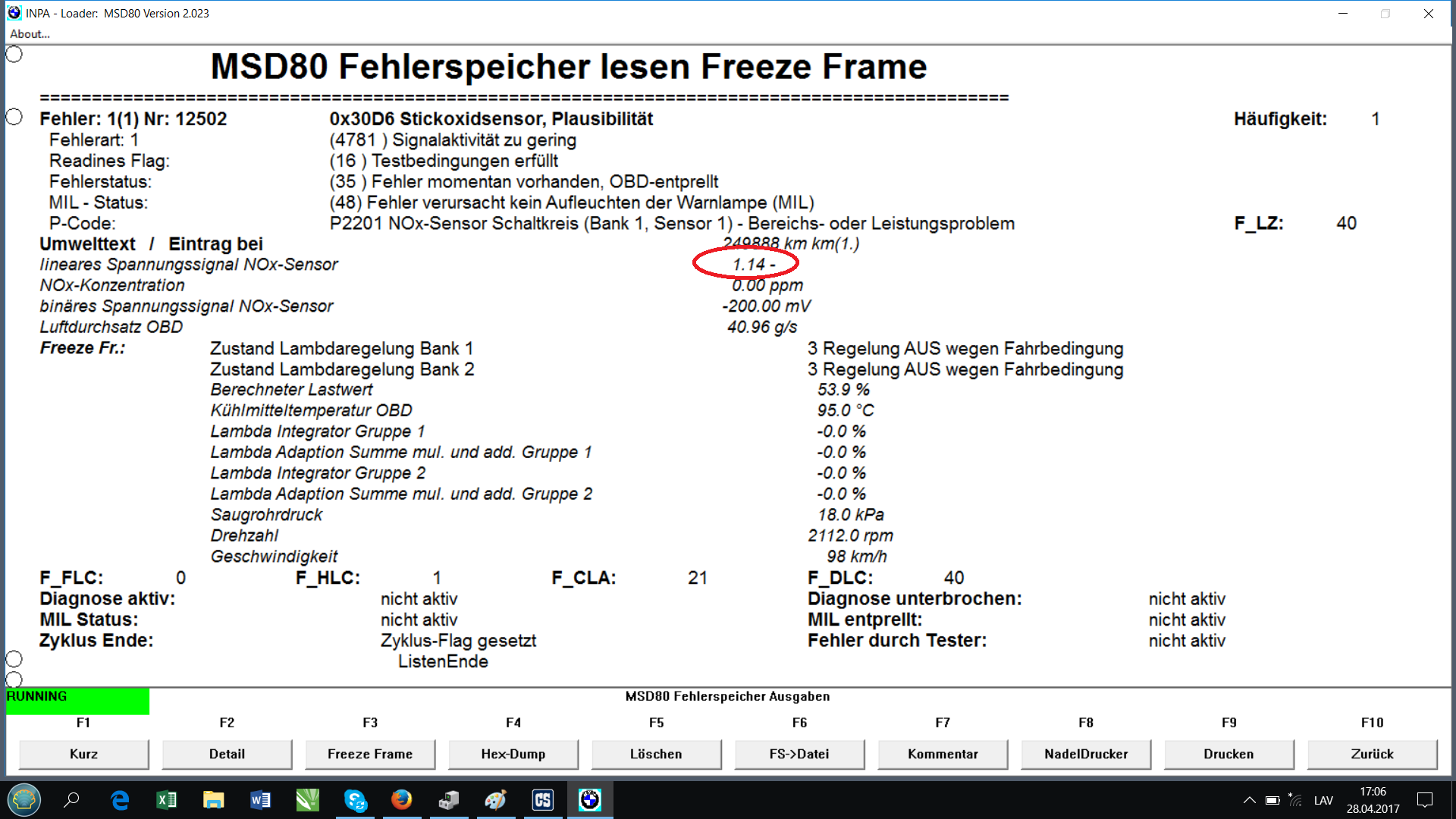 The error message indicates a problem of the NOx sensor. Lamba, reported by the NOx sensor in the Homogeneous mixture, has been 1.14. Cause of problem – small air suction in the exhaust system. 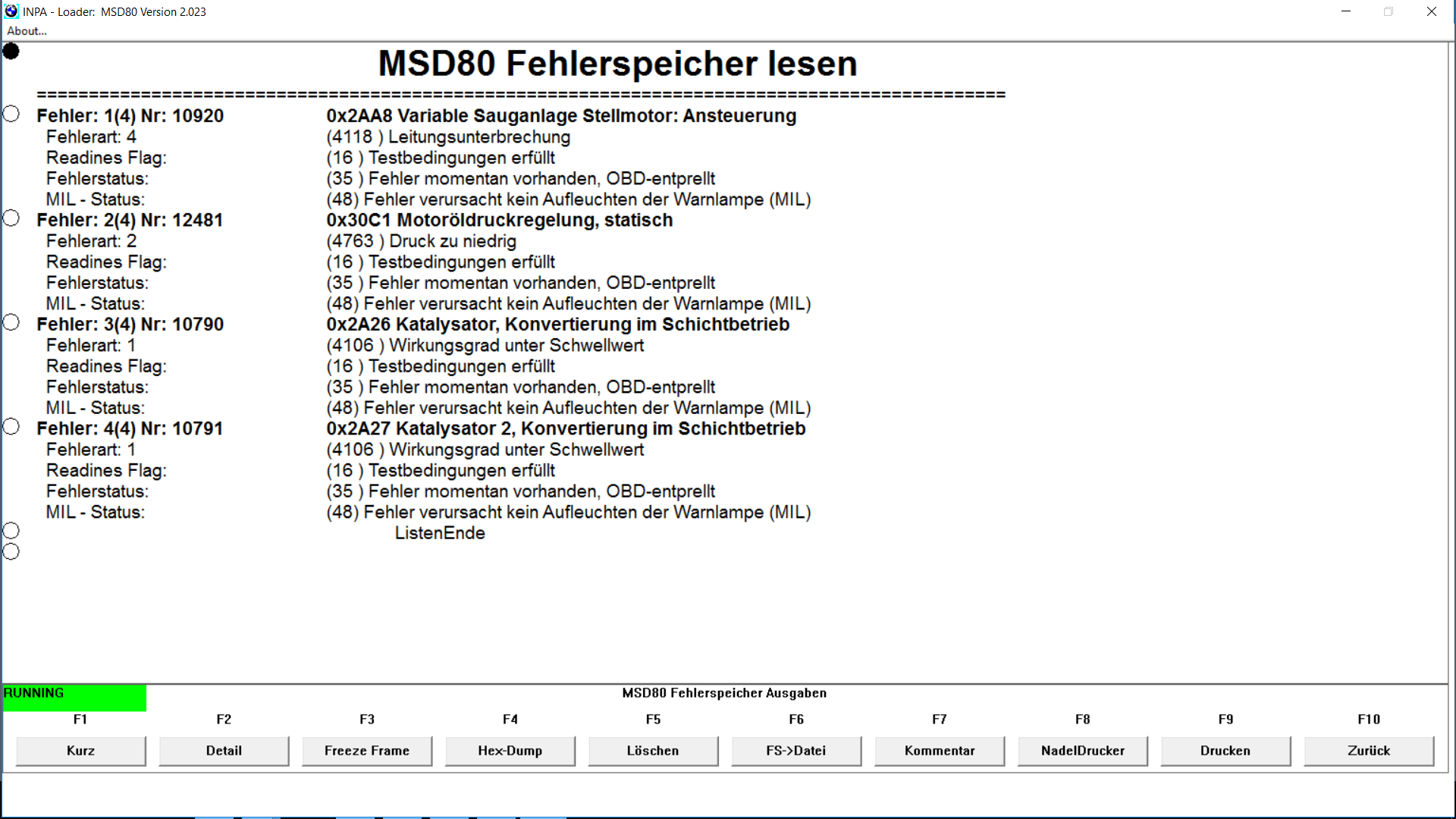 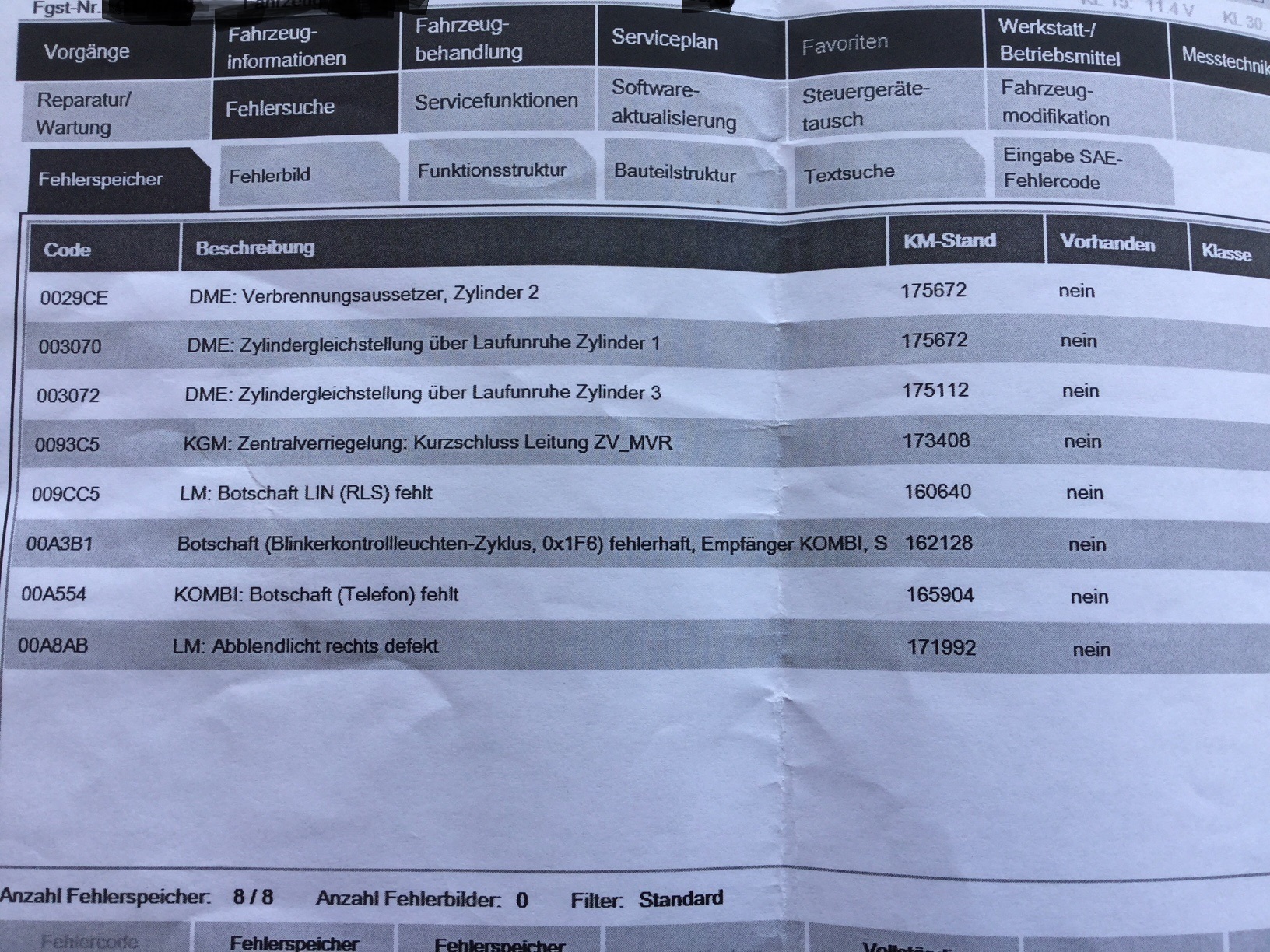 Full diagnostics indicated a specific defect of the 1-st cylinder. 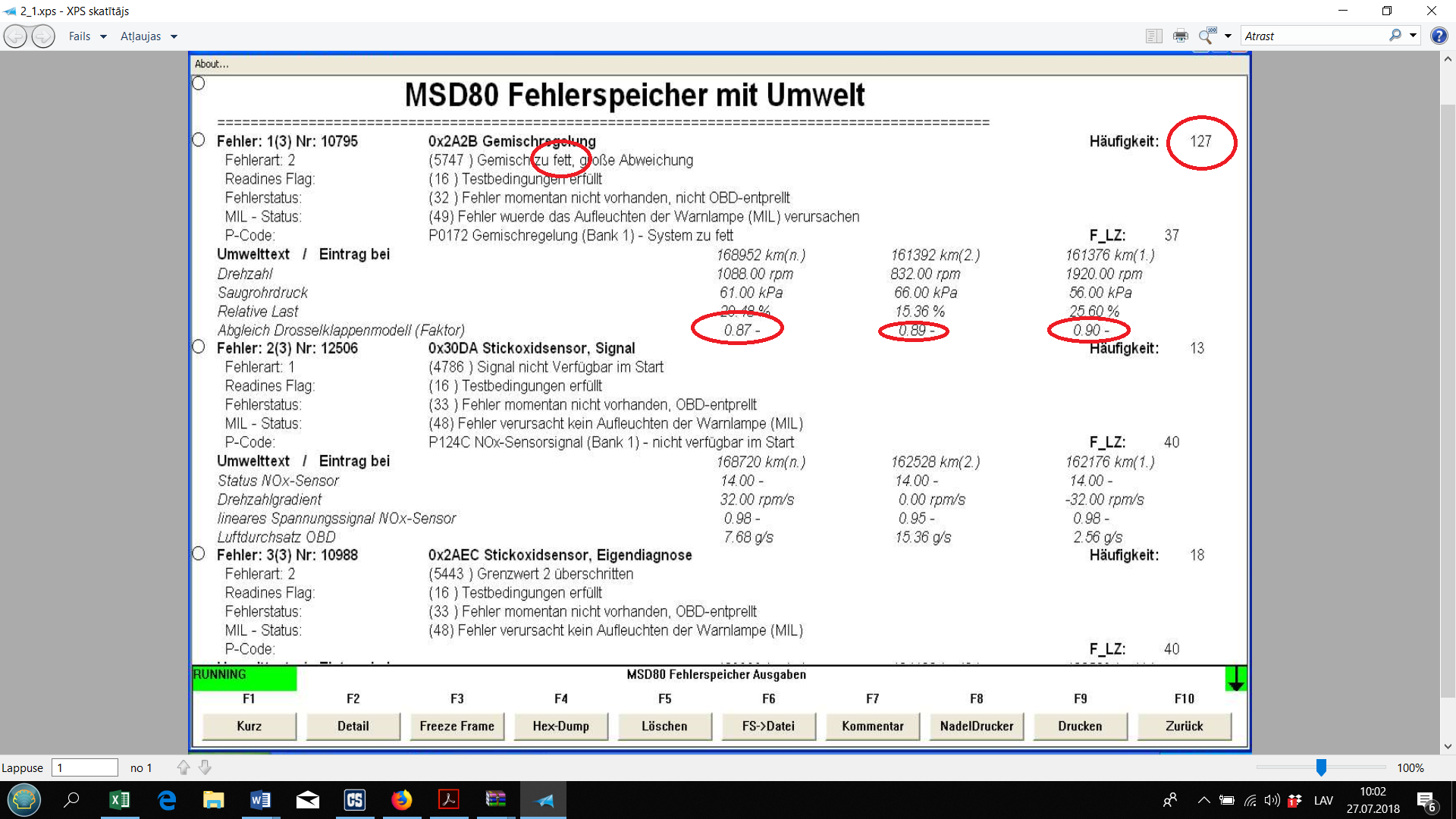 Mixture too rich? And what to blame this time? The throttle valve (it’s indicated in the description of the error message)? No, the attributes of the error message confirm – the throttle valve is not the cause! This time the cause of the problem was CCVV membrane. But also increased fuel pressure can cause such problem (for example, N52, N46 series engines). The cause of this problem, in turn – clogged return feed of the fuel or damaged fuel pressure regulator. 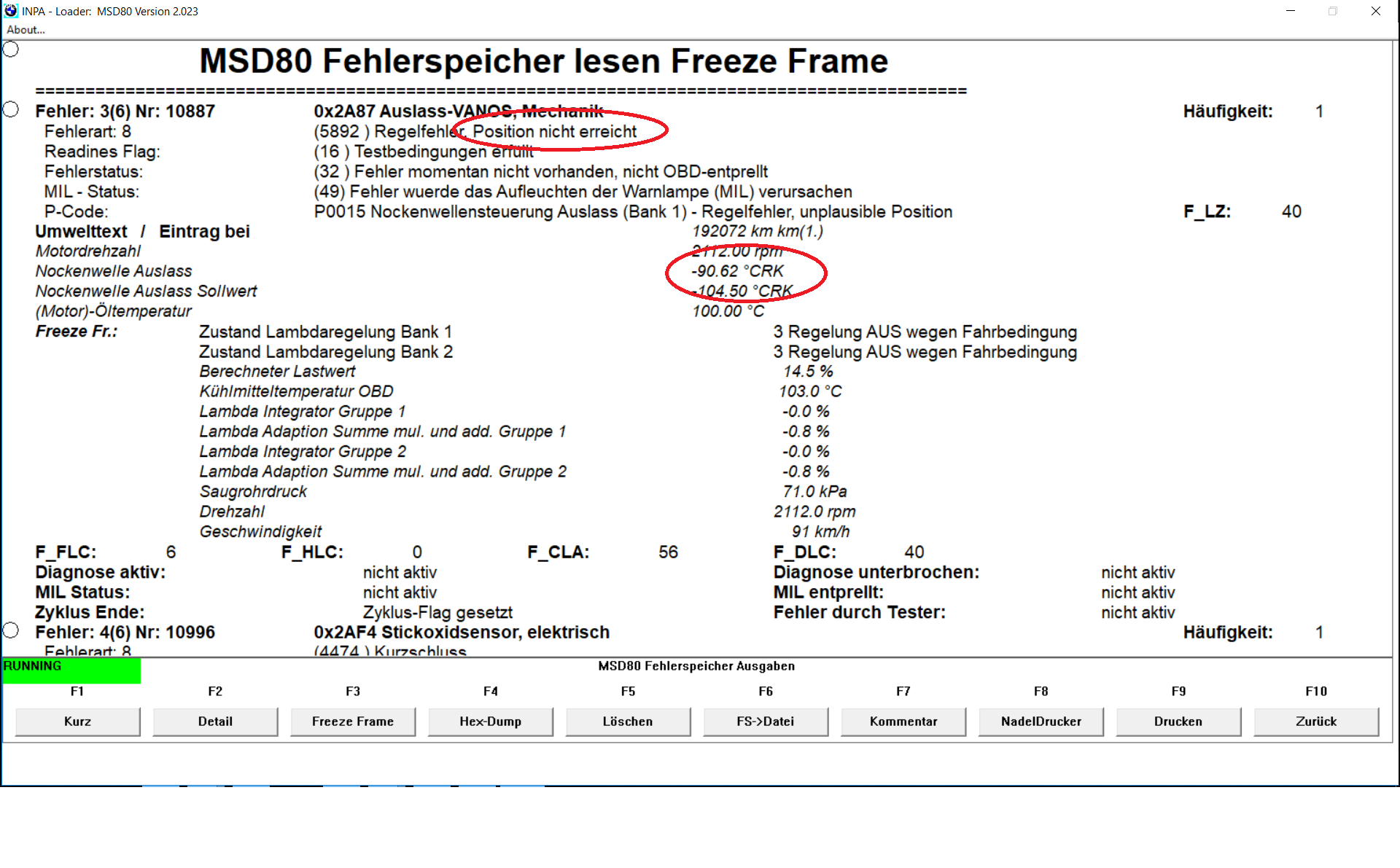 Mismatch of inquired and confirmed the position of VANOS? There are “specialists”, who will immediately replace whole VANOS mechanism and even camshafts. Actually, the cause can be even short-term problems with oil pressure. The most common cause – the valve. 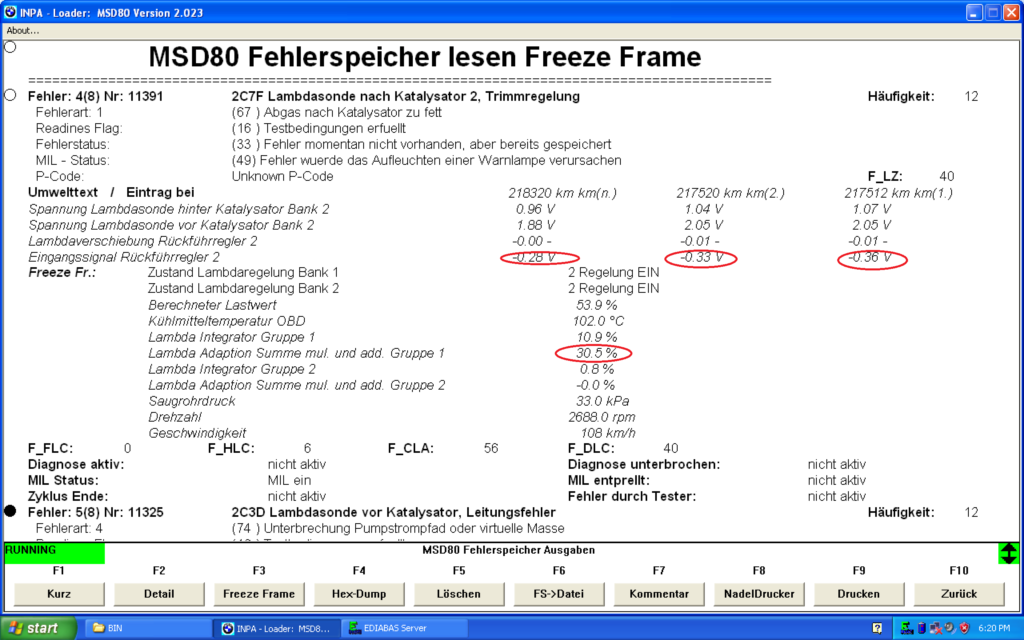 Problems with control probe? Does it have to be replaced? No! The problem was leaking injector, due to which there was an incorrect fuel mixture, which DME was not able to correct. 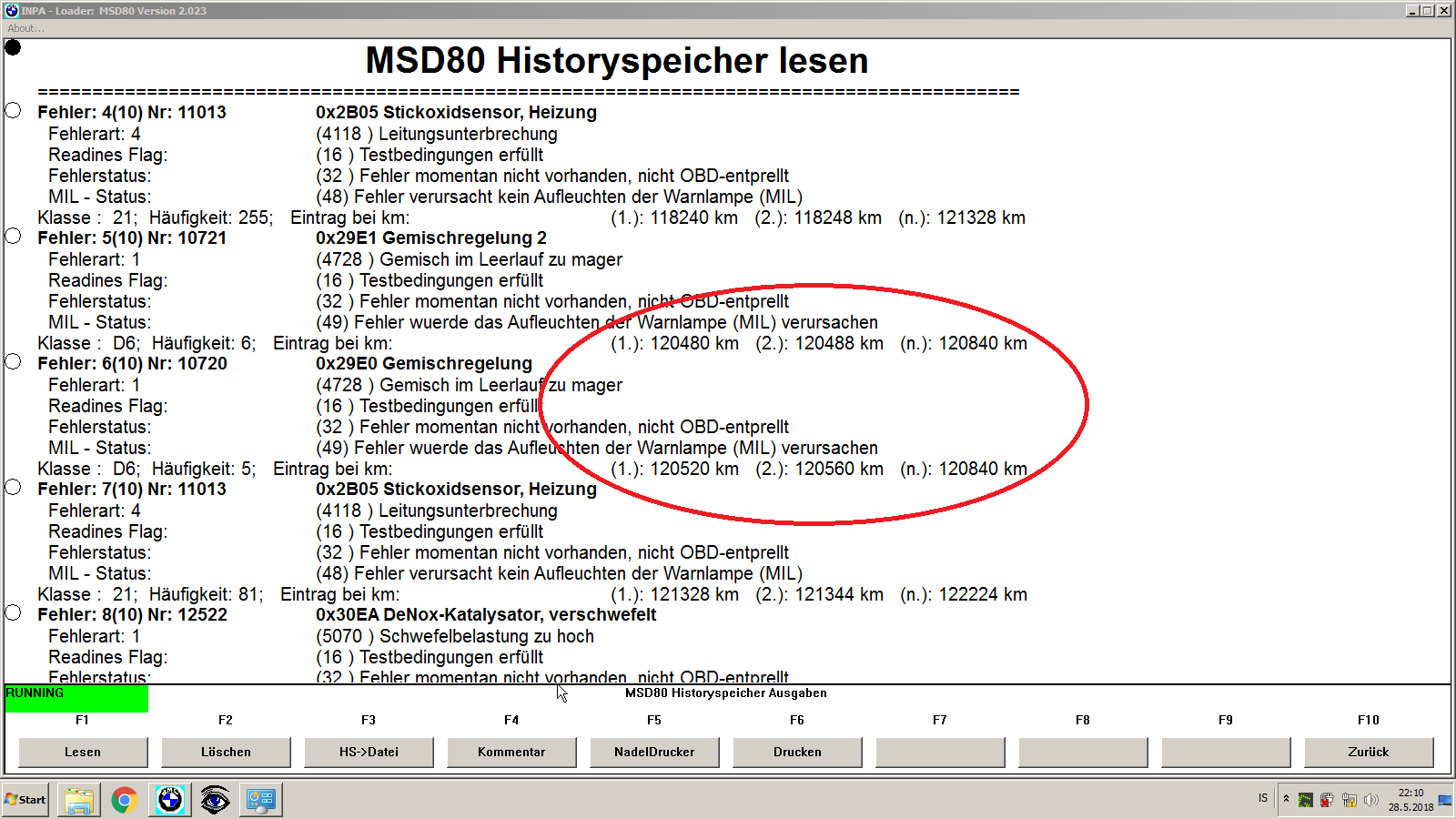 The lean mixture in both banks! Both regulation probes have to be replaced? Of course, no! The problem with air suction in the inlet manifold has to be solved! 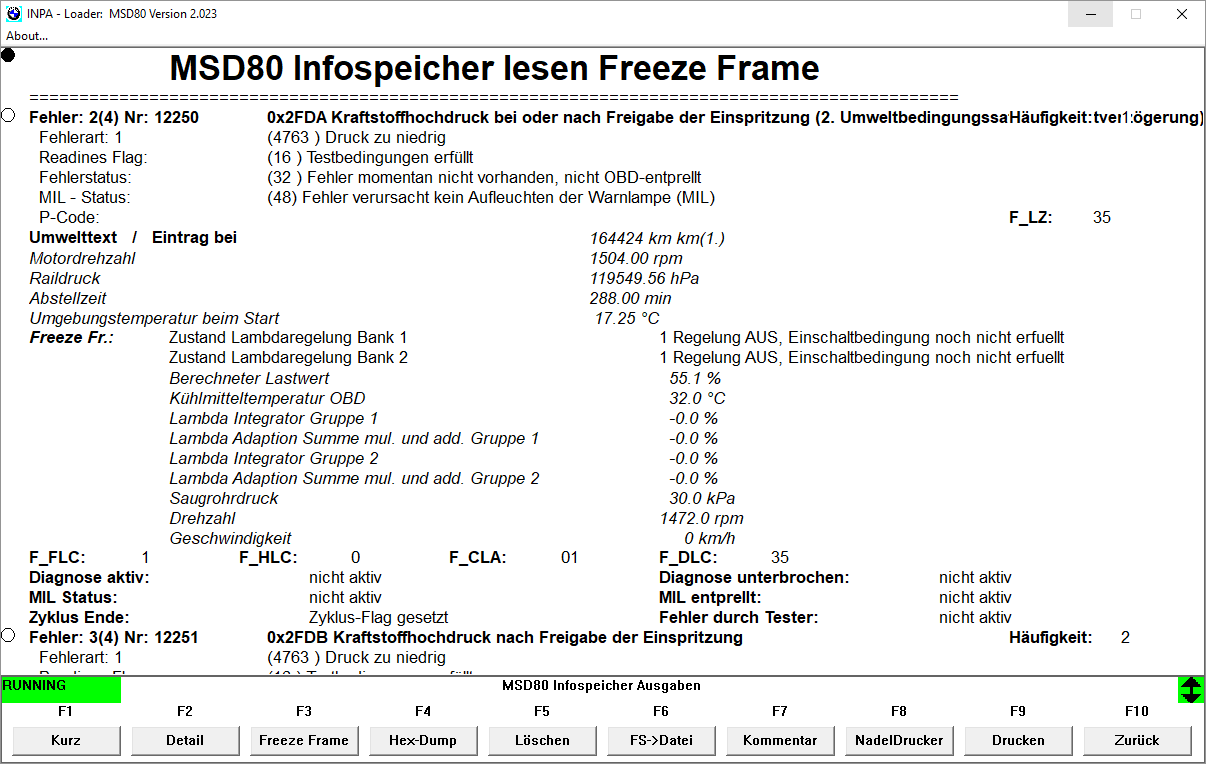 HPFP has to be replaced? As you can see, the problem was in the moment of the start of the engine, it can be caused by leaking injector, leaking reverse valve of HPFP, decreased the pressure of LPFP pump in the moment of problem. 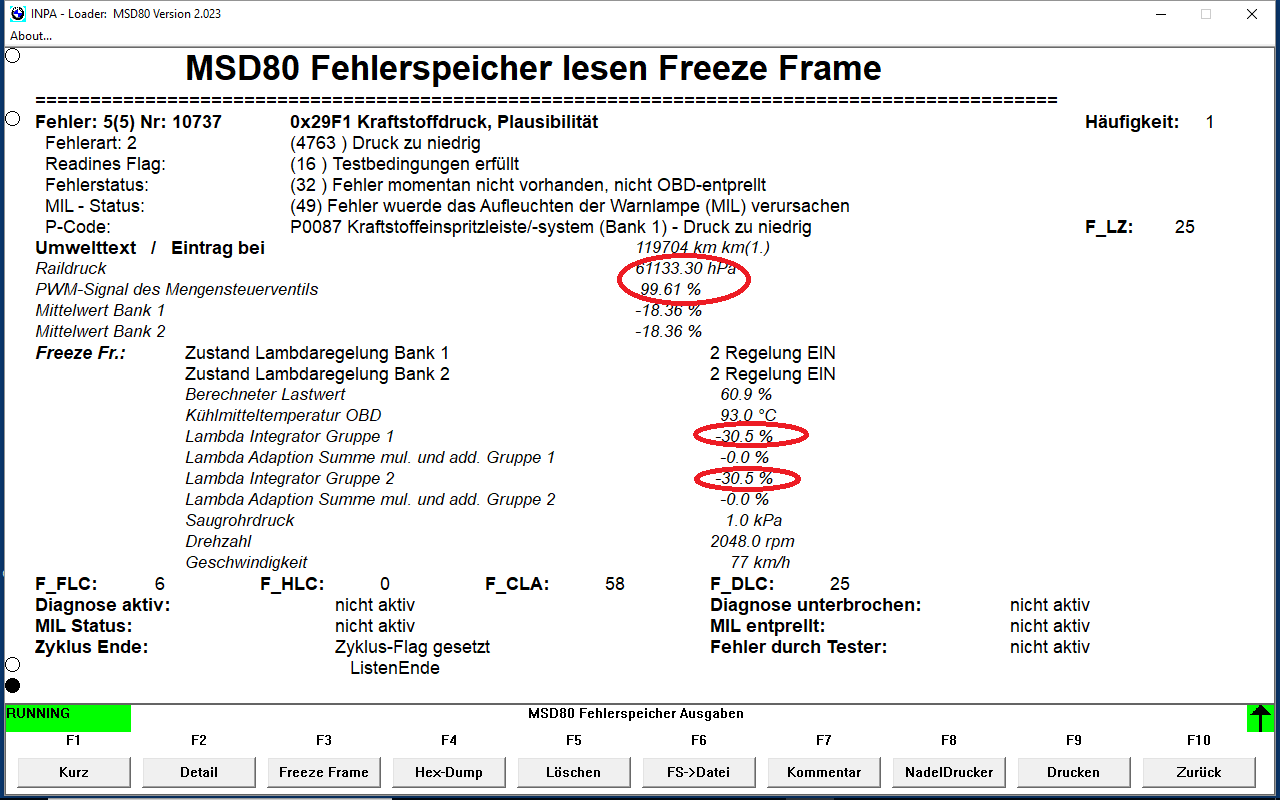 And this time? The pressure only around 60.000 hPa! The defect of the pump? As we see, the fuel mixture in the exhaust is strongly enriched, obviously – the data of the pressure sensor are incorrect.